The Air Prevention & Control of Pollution Act is an Act by Parliament to provide for the prevention, control and abatement of air pollution, for the establishment, with a view to carrying out the aforesaid purposes, of Boards, for conferring on and assigning to such Boards powers and functions relating thereto and for matters connected therewith.The objective of the Air Act 1981 is to prevent, control and reduce air pollution including noise pollution.

Under provisions of this Act, no person shall, without previous consent of the SPCB, establish or operate any industrial plant in air pollution control area the investor has to apply to the SPCB/Pollution Control Committee (PCB) to consent. No person operating any industrial plant shall emit any air pollution in excess of the standards laid down by the SPCB and have to comply with the stipulated conditions. 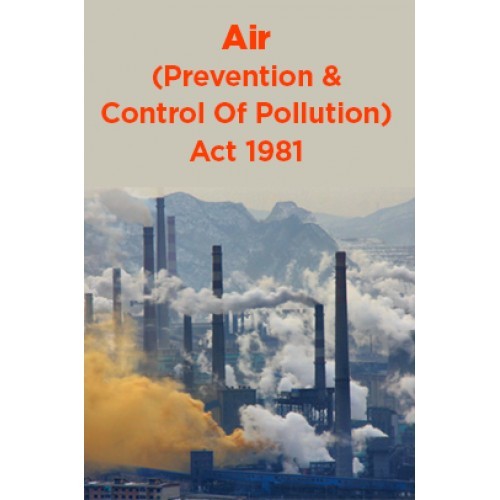 State Government may  by notification in the Official Gazette, appoint, constitute a State Board for the Prevention and Control of Air Pollution under such name as may be specified in the notification, to exercise the powers conferred on, and perform the functions assigned to, that Board under The Air Prevention & Control of Pollution.State Board has following:-

(a) a Chairman, being a person, having a person having special knowledge or practical experience in respect of matters relating to environmental protection, to be nominated by the State Government.

(d) such number of non-officials, not exceeding three, as the State Government may think fit, to be nominated by the State Government to represent the interest of agriculture, fishery or industry or trade or labour or any other interest, which in the opinion of that government, ought to be represented;

two persons to represent the companies or corporations owned, controlled or managed by the State Government, to be nominated by that Government

Main Functions of Central Board under The Air Prevention & Control of Pollution are:-

(a) advise the Central Government on any matter concerning the improvement of the quality of air and the prevention, control or abatement of air pollution;

(b) plan and cause to be executed a nation-wide programme for the prevention, control or abatement of air pollution;

(c) co-ordinate the activities of the State and resolve disputes among them;

(d) provide technical assistance and guidance to the State Boards, carry out and sponsor investigations and research relating to problems of air pollution and prevention, control or abatement of air pollution;

(e) plan and organise the training of persons engaged or to be engaged in programmes for the prevention, control or abatement of air pollution on such terms and conditions as the Central Board may specify;

(f) organise through mass media a comprehensive programme regarding the prevention, control or abatement of air pollution;

(h) lay down standards for the quality of air.,

(i) collect and disseminate information in respect of matters relating to air pollution;

(j) perform such other functions as may be prescribed.