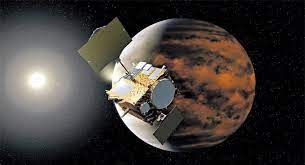 . Shukrayaan -1 is a proposed mission to the fiery planet, Venus which is also known as Shukra. Based on the success of Chandrayaan and the Mangalyan ISRO has been studying the feasibility of future interplanetary missions which includes Venus. Venus is the second planet from the sun and is the hottest in our solar system.

The closest planetary neighbor to earth Venus has a very dense atmosphere. The surface temperature of Venus goes up to 470 degrees celsius making it the hottest planet of the solar system and the pressure on Venus’ surface is 90 times more than the surface of the earth, no human or spacecraft can survive in these conditions.

Scientists observed signs of microbial life in that region with the new science of life on Venus. ISRO proposed a mission to venus which will orbit the planet and focus on the chemistry of its atmosphere the mission will study the surface atmospheric chemistry and the interaction of Venus’s atmosphere.

The VIRAL (Venus Infrared Atmospheric Gases Linker) instrument co-developed with the Russian federal space agency Roscosmos and the LATMOS atmospheres, environments and space observations laboratory attached to the French national scientific research centre CNRS has been selected by the ISRO after a request for proposals.

With solar radiation and solar winds, the spacecraft will be launched by ISRO’s most advanced rocket GSLV mark iii Shukrayaan -1 will be able to carry 100 kg and around 16 Indian and a 7 international payloads have been shortlisted to orbit around the Venus.

The mission is to study atmospheric chemistry, compositional variations and dynamics of Planet Venus. Earlier, the mission was scheduled to be launched in 2023.  The ISRO has short-listed 20 space-based experiment proposals, including from France, for its proposed Venus orbiter mission ‘Shukrayaan’ to study the planet for more than four years.