The earth is made up of several concentric layers of varying density and composition. Broadly, threezones can be identified on the basis of changes in the velocity of seismic waves while passing through theearth as below – 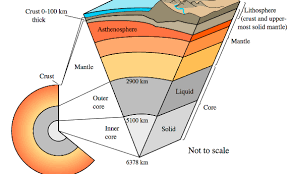 Mantle:Mantle is believed to be formed largely of silicate minerals rich in iron and magnesium.The velocity of seismic waves relatively slows down in the uppermost zone of the upper mantlefor a depth of 100 to 200 km. This zone is called the zone of low velocity.Gutenberg Discontinuity separates the mantle and the outer core.

Crust:The outer covering of the crust is of sedimentary material (granitic rocks) and below that liecrystalline, igneous and metamorphic rocks which are acidic in nature. The lower layer of thecrust consists of basaltic and ultra-basic rocks.